The time has come, I decided this morning, to put the tomato and courgette seedlings out into the greenhouse to fend for themselves. This may be a big mistake. I think the danger of frost is more or less over now, but it’s hard to tell. I have no space in the garden to plant them, having got carried away and sown too many things, so I’m not entirely sure what will eventually become of them, but hopefully they’ll survive for a bit out in the wind and the rain.

Next to the greenhouse is a growbag full of early potatoes, and the main Maris Piper spuds into the bed in front of the greenhouse as well. Wilb promptly dug them up again, but I have now put them back where they belong.

On the other side of the garden, under the shade of a big fence, are some pea seedlings, which I planted straight into the ground earlier this month. They seem to be making an appearance, I have stuck labels in next to them so that hopefully I won’t accidently dislodge them later.

They’ve got a little way to go yet if they’re going to get to the proportions of Barbara’s peas over at If Only, come on little ones, you can do it! 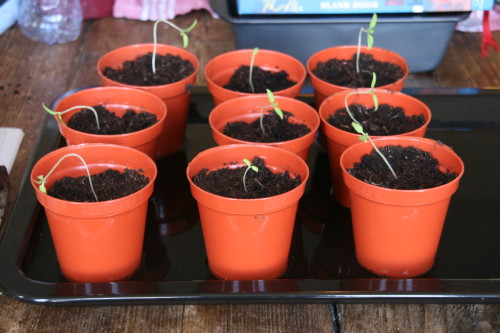 My tomato seedlings are officially leggy.  Helen optimistically described them as ‘bendy’ , but let’s be honest here, they are leggy.  There’s no two ways about it.  I suspect I planted them too early, and also then left them in a very warm spot for a long time, hence they have gone and shot up without developing more than two leaves.

My little friend Boo’s tomato plants were planted more or less at the same and are positively leaps and bounds beyond these, with loads of leaves and practically bearing fruit.  Mine have some serious catching up to do!

But all is not lost.  I am going to persevere with them and cross my fingers and introduce them to my little plastic greenhouse, and with any luck they will survive.  The early potatoes have now gone out into the garden to fend for themselves in a grow bag, so these must go out too.

I also planted some little peas directly into the garden today, so hopefully they will also survive.  I hope we don’t have any more frost!

Despite the ongoing saga of the wormery woes, I have two success stories on the garden front, and one more of failure, just to keep my feet on the ground.

The potatoes are now pretty much chitted up, if that’s the appropriate phrase. I read today that Good Friday is the day for planting them, so I’m going to be a traditionalist and leave them until then. Not least because I need to plant them in grow bags, and I haven’t got any yet.The tomato seedlings are doing well, a few of them have just started to produce a third leaf. I guess they will need planting in individual pots soon, and hardening off in the little plastic greenhouse I now have outside.

But what happened to the onions (not shown stage left)? 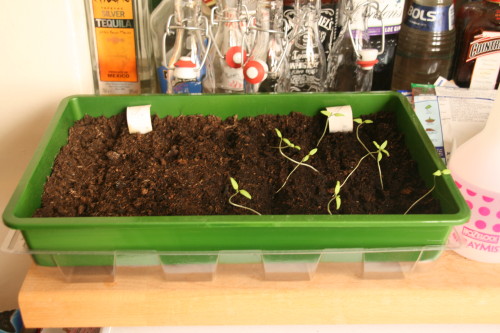 I was watering them with a spray can, because they were looking a bit weedy. Unfortunately they then all died off in spectacular style. This is rather upsetting.

It’s not as if I actually need to grow onions, more my feelings of bad motherhood that I let them perish. I’m wondering what exactly I did wrong, and if it’s worth starting again?

Come for the recipes (if I can make them, you can), stay for the knitting, gardening and domestic disorder.