I love my garden.  Here it is, as photographed from my kitchen window.  It is 5x5m square (one-hundred-and-sixtieth of an acre), small but perfectly formed.  Unfortunately the gardener does not measure up to the garden.  I am the worst kind of fair weather gardener.  On the first sunny days of the year I get over-excited and plan all sorts of amazing food growing adventures.  Sometimes I even get round to actually planting things.  Mostly though at some stage I will neglect everything for a month and a half, and then it all perishes.

My fruit and veg collection at the moment consists of a couple of very active raspberry canes, which are shooting up (no sign of any fruit yet though) and three beautiful cordon fruit trees I rescued from my Mum’s garden which are spending this year settling in.  We hope to have some fruit from them next year.  There is also a rhubarb crown hiding in my veg patch, but I have yet to nurture it into producing anything edible.

On the sustainability front, the compost heap has now become two compost heaps, because I naively filled the first with all kinds of woody prunings which are never going to rot down.  I need to go through it and get rid of all of that stuff.  Compost heap number two is a brave new departure, which has been treated nicely and should actually compost properly with a bit of luck.

The wormery is doing well, the little wrigglers seem to survive now whatever the weather, and are busily churning out lovely, friable black gold from my kitchen scraps.   It is very exciting to lift the lid and see all the life in there.  It is absolutely heaving at the moment!  Looking forward to using some of the worm casts when I plant up some lettuce shortly.

My next project (Him Indoors despairs of all this, and would much rather I actually grew stuff, rather than filling the garden with endless sustainability projects) is to harvest some rainwater.  This is something I should have set up years ago, but somehow it was difficult to work out the best way to do it, and so it never got done.  Happily I now have an ingenious plan.  It is the smallest scale water harvesting system ever, but I am very excited about it.

Finally, the chicken plan may eventually materialise as my downstairs neighbour is also keen.  No actual plans yet but it’s looking ever so slightly more realistic.

I hope your gardens are doing much better than mine, filled with beautiful flowers and burgeoning fruit and veg.  Hopefully I will have some better news next update.

Lots to report on and apologies for not having posted very much aside from recipes over the past few months.

I’m now on maternity leave, and gradually getting used to the change of pace from shift work (alarm clock goes off at 3.45am) to maternity leave (alarm clock turned off) to the impending arrival of LW (who is now the size of a watermelon, for those of you still interested in the fruit and veg analogies – alarm clock in human form goes off at 2am, 3am, 4am…)

The fair-weather gardener in me has kicked in over the last couple of days, with the sunshine coaxing me and Wilb into the garden to see how everything has fared during an extended period of neglect over the winter.  The lovely fruit trees Mum gave us a few months ago are planted, two apples and a plum, and will hopefully start producing a few new leaves soon, to prove that we haven’t killed them in the transplantation from their gorgeous Worcestershire home to rather less glamorous Tooting postage stamp.

ng at the compost in both the compost bin and the wormery (the worms have miraculously survived the winter) which is more exciting than I should really admit to.  Have a look at my guide to setting up a wormery if you’re thinking of starting one yourself, I highly recommend it.  The compost heap is overflowing, and having spent a long time looking for a hand crankable garden shredder, I eventually resorted to a pair of secateurs and a bucket to convert some of the strings of ivy, bits of rose bush etc… down to manageable scraps.  Then all that remained was to weight the whole thing down with something, which Wilb kindly obliged to help out with.  I’m hoping that the heap will prosper now it’s been given some TLC.

In other news, I went along to the Transition Town Tooting first film night last night, a great event where six short films were shown and finally judged, with ‘Mine: story of a sacred mountain‘ winning the much coveted Tooting Palm Verte for the best film of the evening.  Many thanks to TTT for a great event and a good opportunity to find out about more TTT events, such as the Trashcatchers’ Carnival which I initially thought was just a big litter-picking event, but turns out to be a multi-coloured spectacular down Tooting High Street in July, which sounds like it’s going to be fantastic.

Finally I’ve been micro-gardening, which is where you wish you had more space for gardening, but you just don’t, so you have to make do with what you have to indulge the gardening passions, in this case a seed germination test, in which I’ve been testing a load of old seeds I found in my shed, to see whether they are still alive, despite not having enough space to then plant even half of them if they prove viable, but it’s fun to see all the different seeds.  It’s amazing how variable they are, from tiny, pitch black shrapnel like onion seeds to big, white, tear-shaped courgette seeds.  That and watching the garden out of the window, which is quite fun when the sun is shining, and there is something of a showdown going on between three migratory cats, several birds and of course the beautiful fox (no longer a cub) which has made its home on top of the garden wall.

My neighbour is paving his 30ft garden with massive slabs of battleship coloured concrete.  This is a tragedy, clearly, but it was going to happen sooner or later.  He lets the house out to students, a transient bunch of doctors and nurses (probably, we live across the road from a hospital, so it seems a fair assumption), who understandably are not motivated to grow much in what has always been a bit of a wilderness.

It has been a source of some reassurance for me though.  I can relax, safe in the knowledge that however long I leave my garden when I’m too busy to give it the love it deserves, it will never quite descend into the natural jungle that is next door.  If you can call a combination of brambles and nettles a jungle.

I have attempted a spot of guerrilla gardening on it, by occasionally chucking various seeds over the fence, but to not much avail.  I’ve even entertained the odd day dream about knocking through and illegally using it as an allotment patch.  Now it seems the landlord has chosen the terminal option for garden maintenance.  Pave it once, and it will never be out of control again.  I suspect a man may pop in once a year to napalm the weeds out of the cracks between the slabs, and that will be that.

All of which reminded me that there is a new scheme which might save other plots from similar treatment.  Hugh Fernley-Whittingstall, saviour of the chicken and committed supermarket-botherer has set up a website which aims to match gardeners with plots of orphaned land around the country.  There are nearly 40,000 people using it so far, have a look.

Read this.  A very well written and creative article with lots of ideas about thrifty gardening. 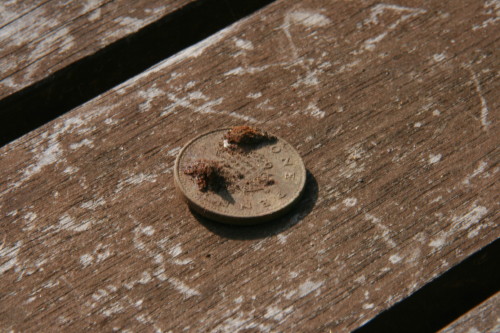 I am very excited.  I spent a lovely couple of hours in the sun drenched (ish) garden yesterday and unearthed a whole English penny!  I am currently debating what type of sweet to buy with my treasure.

Also have now earthed up the potatoes, and the courgettes are also doing quite well.  Happy days in the City Bumpkin garden.

The time has come, I decided this morning, to put the tomato and courgette seedlings out into the greenhouse to fend for themselves. This may be a big mistake. I think the danger of frost is more or less over now, but it’s hard to tell. I have no space in the garden to plant them, having got carried away and sown too many things, so I’m not entirely sure what will eventually become of them, but hopefully they’ll survive for a bit out in the wind and the rain.

Next to the greenhouse is a growbag full of early potatoes, and the main Maris Piper spuds into the bed in front of the greenhouse as well. Wilb promptly dug them up again, but I have now put them back where they belong.

On the other side of the garden, under the shade of a big fence, are some pea seedlings, which I planted straight into the ground earlier this month. They seem to be making an appearance, I have stuck labels in next to them so that hopefully I won’t accidently dislodge them later.

They’ve got a little way to go yet if they’re going to get to the proportions of Barbara’s peas over at If Only, come on little ones, you can do it! 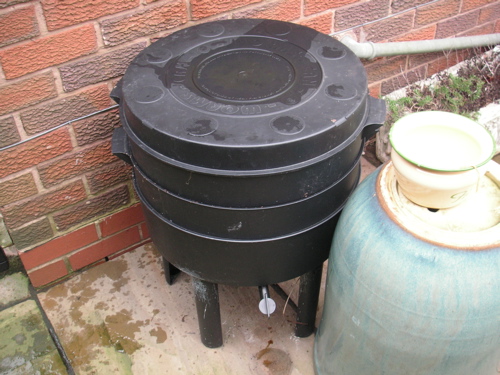 This is my Mum’s ‘Can O Worms’ wormery. I went to visit it (and her of course) last week-end, and felt it my duty to investigate, as my own wormery is quickly turning into a bit of a swamp.

It does seem like a better design. It comes with stackable tiers, so that older compost is separated from the kitchen waste you’ve just added to it. Consequently it has a chance to be properly ‘processed’ by the little worms without being overrun with liquid, which somehow seems greatly reduced in comparison to mine. Here is the can o worms minus the top tray:

Definitely looking more compost like! I am wondering whether this might be a better option for us too. Mum does cosset her worms more than I ever did though. She even has a bag of worm treats stashed away for them!

Anyway, until I have a spare £60 for a replacement home for my little wiggly friends, I will carry on draining the worm juice, just so they don’t drown, which may improve their condition somewhat.

Come for the recipes (if I can make them, you can), stay for the knitting, gardening and domestic disorder.